As we paddle thru life, there are experiences undergone that leave no mark whatsoever upon our ever fragile psyche. Maybe you saw a pretty painting in a museum that one time, or maybe even you dropped an egg on the floor while making a large Sunday breakfast- it happens. Big deal, so what.

What about the events that shock you to your core and leaves insurmountable fear boiling in the pit of your stomach? Maybe this is the declaration of bankruptcy or an enormous accident with irreparable damage caused. We all have these little surprises that come in different shapes and sizes. However, one of the most unanimously remembered events for many has been the rise of an opioid epidemic over the last few years.

Over the last few decades but more so the last couple of years, the United States has seen a rapid incline of alcoholic thinking. Addiction numbers have skyrocketed while overdose statistics are at an all-time high. These frightening changes are all because of this opioid epidemic that has slipped through the medical cracks over the years. What’s intended as a treatment for chronic pain is now the number one fueling agent for chemical dependency. The pharmaceutical industry has a stronghold on both sides of the law sadly.  Meanwhile, while the country is reduced to a “state of emergency” from such, a few concerned states and politicians take matters into their own hands.

The whole country is tired of the alcoholic insanity that’s been prevailing but there are a few that are actually making a stand. Recently a few of the Ohio and Kentucky county governments(along with counties from Florida, Oklahoma, Illinois, New York, and Mississippi), have filed lawsuits against the pharmaceutical conglomerates taking advantage of such dependent times. 65 counties between Ohio and Kentucky- to be exact.

The two Midwestern states have filed their stack of lawsuits against the likes of AmerisourceBergen, McKesson, and Cardinal Health; three Big Pharma corporations. However, what most don’t realize is that these three pharmaceutical companies taken to court are already in line with several others that this nation is waiting to be condemned. The states above have already begun investigative lawsuits with other drug companies such as:

These are the ugly chemical spewing companies leaving their nasty mark on the nation. These are all companies brought to a lawsuit for their false advertisement of treatment for pain and their heavy lack of medical warning. Ohio state attorney General Mike DeWine puts it best, “ they have helped unleash a health care crisis that has had far-reaching financial, social, and deadly consequences in the State of Ohio.” Unfortunately, though, Ohio is just one of many states victimized by such chemical distribution.

The Opioid and the Damage Done

Sometimes when pain is immense enough, regulated doses of opioids can help ease discomfort- that’s the idea at least. Pharmaceutical lobbyists got their hands on the opioid industry back around 1905 and revolutionized the way we conduct treatment for injuries. Opioids can be used to mask advanced medical procedures or they can be used to partly treat long/short term pain with combinations of other medications over time. Opioids were never meant to wipe out such large numbers of the human race though.

A few of the official Ohio county lawsuits being filed claim –  “the drug companies engaged in fraudulent marketing regarding the risks and benefits of prescription opioids which fueled Ohio’s opioid epidemic.” Of course, the lawsuits jump straight to the nitty gritty point: the pharmaceutical companies as a whole are responsible for the record numbers of premature death adding up every day, month, and year after year. 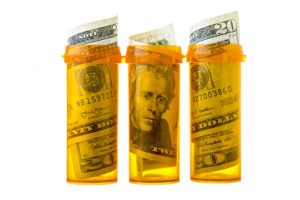 For many, the root of the problem boils down to the United States government and the actions being taken to prevent alcoholic thinking. Unfortunately, the government works for the government- plain and simple. Money kind of runs the world and the people running it are the ones ultimately making all the decisions. Laws are put in place by the government so that the pharmaceutical companies can benefit from both sides of it. The pharmaceutical industry and the billions in it are the reason why addiction treatment services are few and far between. May seem cynical, but it’s the chemical reality of the matter.

Although there may not be one particular politician or group of that potentially benefit from pharmaceutical sales, it really seems to be the matter of old money befriending old money. Oil tycoons, centralized banking, and pharmaceutical sales have been the backbone of our indebted country for many many years. If you take out one head of this seven-headed dragon, the results could be catastrophic. Whether there’s the truth behind it or not, it seems to be a large reason why it takes so much time for any action to be made. The people are getting restless so the blueprints are being redrawn.

Opioids happen to be one of the biggest problems out there because of their lethality. The infamous “Drug War” of the United States has carried out for years but nothing has led a detrimental warpath like the opioid crisis has. Crack cocaine ravished the 1980s, but the statistics are small potatoes in comparison to that of what the country is up against right now.

Looking at this hostage opioid situation our loved ones are locked in can put anybody’s feathers in a ruffle. Remember though that alcoholic thinking doesn’t give you a choice. The disease causes all actions made to revolve around such chemical warfare. The only solutions are prevention and addiction treatment services. It’s a matter of the people using their voice and standing for change. You see, addiction won’t be disappearing anytime soon, but maybe the influx of opioids in this country will.

Tired of Being a Pharmaceutical Slave?

Chemical dependency is no laughing matter. Opioid addiction is a very real disease that causes unexpected death after death. Please do not fall victim to something that could’ve been obviated. If you or a loved one has been struggling with getting a firm grasp on sobriety and need detoxification, please call 1-800-481-8457. Our teams of specialists are waiting by to help figure out what options are best for sending your life is a comfortable direction that you can proudly stand behind.