Home » Addiction Blog » What Does the 3rd Step Really Mean?

What Does the 3rd Step Really Mean? Walking into 12-step meetings for the first time after leaving inpatient treatment is an intimidating first step, no pun intended. The people are friendly, there are free snacks and coffee, and everyone listens to you when you talk about your problems – what’s so scary about that? For many, the intimidation from the 12 steps comes not from the people or sharing, but the 12 steps themselves and specifically the 3rd step.

The 3rd step of Alcoholics Anonymous (AA) and Narcotics Anonymous (NA) states: “Made a decision to turn our will and our lives over to the care of God as we understood Him.”

What the heck does that mean? Do you have to submit yourself to something you can’t see or speak with? How has this God helped you in the past anyway and what’s going to make a higher power help you this time?

The 3rd step is much more complicated than its text but can help anyone with the right mindset and attitude. Let’s learn more about AA and NA’s 3rd step including what it means and what it’s designed for. You’ll get much more out of 12-step meetings when you understand the 3rd step.

God as We Understood Him

The key phrase is that follow-up, “as we understood Him,” it’s even underlined on AA’s website. God does not have to be the classic Judeo-Christian God or a guy with a long white beard sitting among the clouds but your own personal perception of a higher power. Many have chosen the God of their childhood as their higher power, but others have put their faith into fictional characters, the rooms of AA, – even inanimate objects. It doesn’t matter what you consider a higher power if it’s something outside of you. You can be agnostic or atheist and still get the benefits from the third step by simply getting outside of your own head and relying on something else for a change.

Giving Outside of Yourself

There’s a plenty simple phrase in AA and NA ‘“if you could get yourself sober you already would have.” Alcoholics and addicts are classically stubborn, prideful, and often unable to admit they have a problem and need help. There are many foundations behind AA and NA like fellowship and helping others but it’s difficult to make it to those steps if you can’t get outside of your addicted mindset. 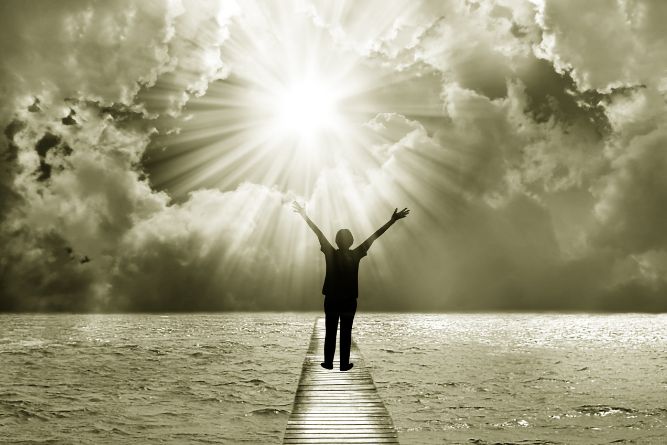 The first three steps of AA and NA are designed so the alcoholic or addict gives up the silly notion that they’re completely in control of their drinking or using habits. Step 1 is designed to let addicts and alcoholics admit, many for the first time, that they don’t have control of a situation and could have a problem. The 2nd step helps alcoholic and addicts search for a higher power to help restore sanity, and the 3rd step ties everything together to let addicts and alcoholics let go and let the higher power take over.

Once they have successfully completed the first 3 steps people are in a much healthier mindset to receive criticism, praise and put the pieces together for lifelong sobriety.

You can work yourself into a mental breakdown trying to stay on top of uncontrollable issues or trying to connect your lies – or you can let go. Addicts have a problem with control, they think they can fix anything and control their life but that’s not even the case for non-alcoholics and non-addicts. Step 3 helps you secede your damaging perception of control to something outside of yourself. You’d be surprised how much less you have the urge to drink or use drugs once you’ve let your uncontrollable problems go.

Addiction shores up anger, frustration, and feelings of hopelessness and those feelings will not keep you sober. When you turn over your negative thoughts and feelings over to a higher power you aren’t glossing over negative emotions or turning your back on your feelings, you are simply processing those feelings and then letting them go instead of allowing them to rattle around your head. The freedom to let go of your negative emotions will affect big changes in your daily attitude.

Once you’re outside of the trap of your own negative thoughts you’re much more open to receiving help and feedback. No one beats addiction alone, but you need to have open ears and eyes to take advantage of the wisdom gained in 12 step rooms. Once you’ve gotten past resistance to feedback and advice by letting go, you’re much better able to listen and put advice to practical use.

Getting Sober with the Third Step

The 12 steps of AA and NA have helped people get and stay sober for decades, and they can help you too. If the word ‘God’ scares you in 12-step meetings always remember the follow up “as you understood him.” Once you’re able to let go and let God (as you understood him) you’ll find a much less complicated path to lifelong sobriety.