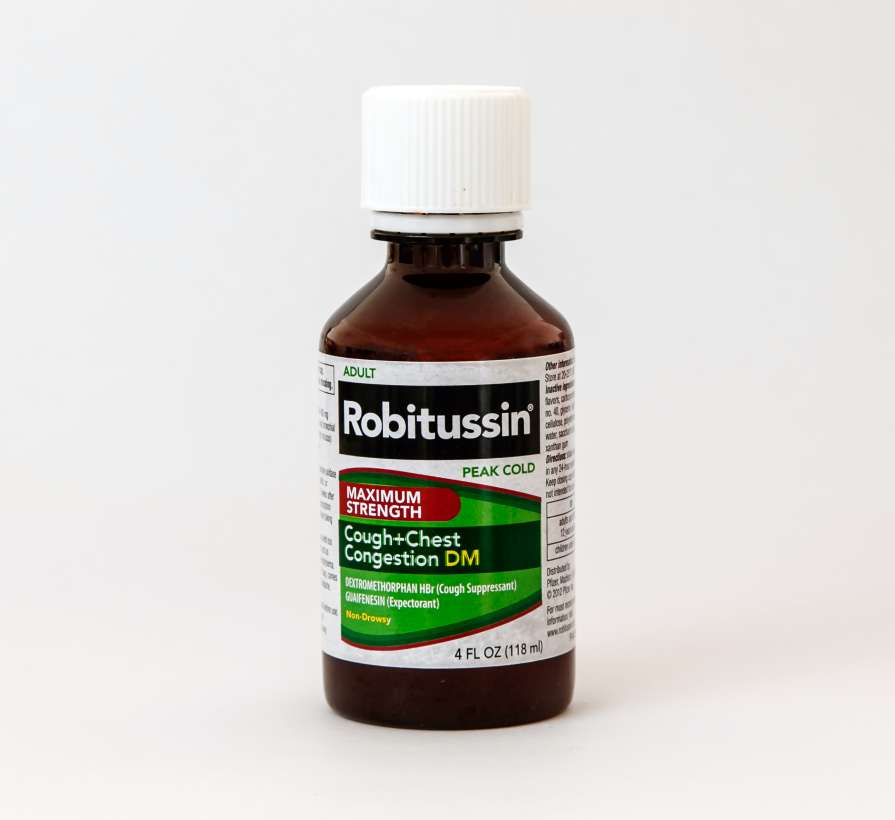 Robitussin is one of the leading cough medicines in the United States, as it is available in almost all grocery stores and pharmacies. For decades, Robitussin has been relied on by countless individuals to give them relief from a cough associated with a cold or flu. And while it is one of the main staples of a solid medicine cabinet, it is also a substance that can be dangerous.

Robitussin is simply the brand name for the combination of dextromethorphan and guaifenesin, two substances that work in concert as a cough suppressant and an expectorant.  While guaifenesin is found in many over-the-counter cough and cold medicines and is not linked to any serious side effects, the same cannot be said about dextromethorphan.

What is Dextromethorphan (DXM)?

Dextromethorphan, as defined by the National Institutes of Health (NIH), is a psychotropic substance that carries a potential for abuse and dependence. It is a common misconception to think that dextromethorphan is not as dangerous as other drugs of abuse, however that is false. When taken as prescribed, dextromethorphan helps relieve a cough. It also can make a person drowsy, often helping them fall off to sleep. But when dextromethorphan is taken in larger doses, it can produce serious effects that can threaten a person’s life.

When someone takes dextromethorphan, the effects of it are similar to that of codeine. However, codeine is an opiate substance that requires a prescription and binds to opioid receptors in the brain. This binding process is one reason why codeine is so habit-forming. But when dextromethorphan is taken, it does not interact with the opioid receptors. Instead, it interacts with phencyclidine receptors. Phencyclidine receptors are capable of helping produce analgesic and anesthetic effects. Additionally, the dextromethorphan in the body helps to produce an increase of serotonin in the brain, which is the feel-good neurotransmitter that creates feelings of wellbeing. With continued dextromethorphan abuse, a person can develop serotonin syndrome, which occurs when there is too much serotonin in the brain. Serotonin syndrome causes effects including, but not limited to, seizures, hallucinations, high body temperature, rapid breathing, and fast heart rate. If serotonin syndrome is not treated, it can result in death.

Robitussin abuse occurs most commonly in teenagers and young adults. Unfortunately, this substance can create dependence, meaning that a person needs to keep taking it in order to prevent withdrawal symptoms from developing. So, yes, Robitussin and other products containing dextromethorphan can become addictive to those who abuse it regularly.

It can be difficult to spot a Robitussin addiction occurring, especially because there is usually little to no physical sign of use like there would be with a heroin or cocaine addiction. Knowing the most common symptoms of Robitussin abuse can help. Different symptoms become noticeable during different plateaus of use. Consider the following:

The more Robitussin that is abused in one sitting, the more intense the effects can become. And, as with any mind-altering substance, consuming too much of it at one time can result in fatality.

Someone who is experiencing an addiction to Robitussin can experience the following symptoms:

These symptoms are often painful and distressing to the point where a person may rather continue using than continue detoxing. This is why detoxing from Robitussin and other dextromethorphan products is done best in a safe, professional treatment facility.

If you are abusing Robitussin or are addicted to it, there is help available. Getting treated for this type of addiction looks similar to the treatment provided for any other addictive substance. Depending on your situation, you may begin your treatment by detoxing in the care of professionals. Once you are well enough to participate in therapy, you will do so for the length of time that is best for your needs. Continuing to follow through in your process of recovery is vital and includes developing skills to maintain your sobriety for a lifetime.

Do You Need Help? Call Us Right Now.

We know how easy it can be to brush off an addiction to a drug like Robitussin. It is available everywhere and it’s cheap, so how can it be so bad? Unfortunately, Robitussin can become addictive and cause problems in your life that are exact to those of heroin, cocaine, and prescription drug addicts. The good news is, however, that recovering from Robitussin abuse or addiction is possible.

If you are addicted to Robitussin or are trapped in a cycle of Robitussin abuse, reach out to us right now. We are here to help support and guide you as you make your way on your road to recovery.

Do not let one more day go by without getting the help you deserve. Call us today.

Previous: Suboxone vs. Methadone: What Are the Differences?
Next: How Long is Drug Rehab?