Life tends to come unexpectedly. It’s this rather chaotic event that takes place between birth and death. Of course, the in between varies for everybody, but this long drawn out schematic is a blank canvas for most at least. As human beings having the power of choice, the possibilities are literally limitless. Everything could be anything else and it would mean just as much- right? However, not everything goes as planned in this game of life. Things happen every day that we have no control over and have to accept or move on with. This is a challenge that proves less difficult for some and nearly impossible for others. It’s hard sitting in the dark because most people don’t particularly enjoy being caught off guard. Sure it’s fun to have a surprise birthday party thrown for you or for somebody to gift you a briefcase filled with $1,000,000. I mean what pleasant surprises. This concept of surprise changes quickly when you walk barefooted to your kitchen and strike your toe on the steel coffee table and crumple to the ground wondering why you deserved such misfortune. Or there are those of us who are just trying to find our way through life like the next person and one day we wake up as a “junkie” drug addict or any other form of alcoholic thinking and chemical dependency related terms. For most of us, this was never in the original blueprints we’d discussed earlier. For most, this unexpected prize also hurts when referred to as “junkie”.

So when a local West Columbus store puts up a sign speaking derogatorily to people struggling with addiction and alcoholism, it’s understandable how this can spark many mixed feelings. This particular Ohio convenience store decided to display a sign in one of their aisles right in front of the tin/aluminum foil. The sign states:

“Junkies!!! Go ahead and steal a piece of foil to get high. Just please make sure you OD. Thank You.”

Sunspots of Misfortune vs. Business Reality

The thing is with being a recovering junkie myself, but also a productive member of society, this gives mixed emotions as both sides of the coin are still valued at the end of the day. This is the owner or management of a store that has to upkeep their career/establishment. They are running an operation that is putting food on their table, clothing their children, and allowing them to get by financially with or without stress already added to their plate. So when they see merchandise missing and numbers not matching at the end of the week, there’s clearly a problem. When you have a problem, you find a solution. That’s just basic logic- you try to get rid of whatever it is that is providing this amalgamation of issues. In this situation, it’d be impossible to go on a witch hunt and try to call out everybody that has the heroin chic look of a junkie. A sign seems the most appropriate of course. However- this is a hate sign for drug addicts that had been written with emotion involved. The owner/manager had their reasoning, but the format it was worded was very blunt and straight to the point. This person was somebody who was protecting their store but also probably dimly aware of what addiction is to some. Often times, people have speculation of themselves or a loved one struggling but are in denial about it. For one, a large percentage of our human population has a misconception of what a drug addict or alcoholic looks like and become caught off guard when one shows up right in front of their very own eyes. No, it’s not always the homeless man under the bridge or the bank robber trying to support his habit. Frequently, we find ourselves walking downtown and staring into the eyes of an alcoholic. It can be the well-dressed business man, the soccer mom, or little Tina across the street that babysits the children every now and then. Anybody of any age, race, gender, sex, religion or creed can find themselves face to face in a problem with addiction. Once again- life tends to come unexpectedly. 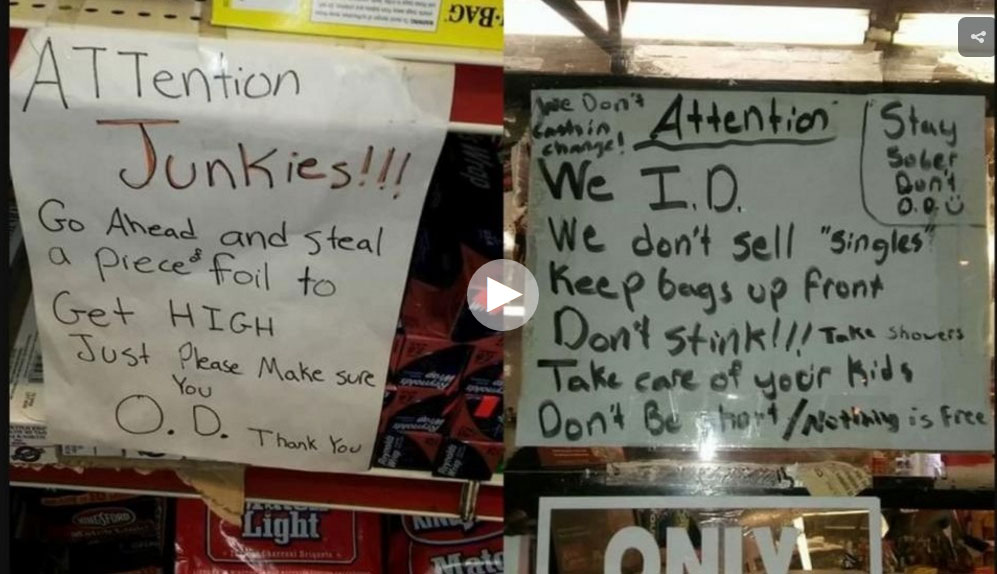 The owner and a few employees commented that it was their last ditch effort to curb the crime and stealing that had been going on in the store for so long. Many chemically dependent people use tin/aluminum foil to cook their heroin or drug of choice off of. This and Q-Tips seem to be the most commonly stolen items from grocery and convenience stores. Unfortunately, there is a drug epidemic going on and putting up hate signs for drug addicts and alcoholics will not be able to stop the disease of addiction/alcoholism. It is a mentality that embodies everything you are and care about. Addiction takes over your heart, mind, body, and soul and leaves you a prisoner to the dependency that it creates. It takes courage, strength, perseverance and more to become clean and sober from some form of addiction or another. Overcoming one’s demons is never an easy thing. The reality of it is that nobody wants to look at the truth. Most people want the watered down solution to everything because it’s easier and takes less effort. The sad truth is that the truth is often sad. But nothing is permanent and scribed in stone except epitaphs and death. Addiction and alcoholism do not ever go away actually, but they can be treated and a new way of life can be discovered. This curse of alcoholism can be a gift and not a curse if channeled the right way. So by all means- protect your phone, wallet, and storefronts, but have some compassion. That person trying to steal tin/aluminum foil did not wake up and plan for their life to turn out like this and are in the dark with what to actually do next.

Having to accept something you don’t like can put anybody’s feathers in a ruffle. Addiction and alcoholism don’t give you a choice. They force you to take the facts as they come and there isn’t a pause button to this movie. If you or a loved one has been struggling with getting a firm grasp on sobriety and need detoxification or treatment, please call 1-800-481-8457 or visit oarcstaging.wpengine.com. Our teams of specialists are waiting by to help figure out what options are best for sending your life is a comfortable direction that you can proudly stand behind.

Previous: Big Pharma and the Drug Epidemic
Next: Types of Alcoholic Drinking